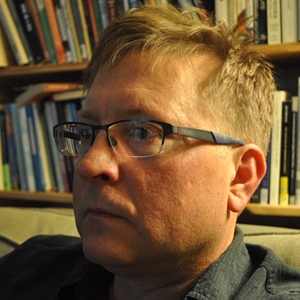 Professor Toadvine will be on leave from the University of Oregon in Fall 2016. In January 2017, he will begin a new position as Director of The Rock Ethics Institute at The Pennsylvania State University.

Ted Toadvine is Professor of Philosophy and Environmental Studies and a Participating Faculty member of the Comparative Literature Department at the University of Oregon. He served as Head of the Department of Philosophy in 2011-2014. Toadvine received the University of Oregon’s Fund for Faculty Excellence Award in 2013. He was Resident Scholar at the Wayne Morse Center for Law & Politics and recipient (with biologist Brendan Bohannan) of the Oregon Humanities Center's Robert F. and Evelyn Nelson Wulf Professorship in the Humanities in 2009-2010.  In 2010-2011, he was Visiting Associate Professor in The Environmental Studies Program at Oberlin College.

Toadvine specializes in contemporary continental philosophy, especially phenomenology and recent French thought, and the philosophy of nature and environment.  His current research addresses the philosophical and ethical significance of deep time, the eschatological imaginary of environmentalism, the relation between geomateriality and memory, and biodiacritics. He is currently completing two monographs—Eschatology and the Elements and Diacritical Life: Animality and Memory—as well as co-editing two volumes: Climate Change and the Task of Thinking (with Timothy Christion Myers) and Animality and Sovereignty: Reading Derrida's Final Seminars (with David Alexander Craig). He is also directing the 2017 issue of Chiasmi International on the theme "Merleau-Ponty's Legacy in French Thought."

Toadvine is the author of Merleau-Ponty’s Philosophy of Nature (Northwestern, 2009) and editor or translator of six books, including The Merleau-Ponty Reader (Northwestern, 2007), and Nature’s Edge: Boundary Explorations in Ecological Theory and Practice (SUNY, 2007). He has published more than two dozen articles and book chapters, including recent articles in Ethics, Policy & Environment, Klēsis: Revue Philosophique, Research in Phenomenology, Graduate Faculty Philosophy Journal, Investigaciones Fenomenológicas, Tijdschrift voor Filosofie, and Alter: Revue de phénoménologie. He is editor of the 2013 issue of Chiasmi International (Volume 15) on the theme "Existence, Diacritics, Animality," and guest-edited the 2012 special 50th anniversary issue of The Southern Journal of Philosophy on the theme "Continental Philosophy: What and Where Will It Be?"

Toadvine has organized or co-organized numerous conferences and events from the international to the local level, including the 2013-2014 Interdisciplinary Public Workshop Series on Biodiversity at Twenty-Five: The Problem of Ecological Proxy Values, the 2013 Conference of the Society for Phenomenology and Existential Philosophy, the 2009 Community Philosophy Institute on Ethical Responses to Climate Change in the Willamette Valley, the 2009 Wayne Morse Center Symposium on The Perfect Moral Storm: Ethical Challenges of Our Climate Crisis, the 2008 Thinking Through Nature Environmental Humanities Summit, and the 2005 International Conference of the Merleau-Ponty Circle.

At the University of Oregon, Toadvine serves on the Environmental Studies Executive Committee and is a faculty ambassador to the Teaching Effectiveness Program. He is the faculty sponsor of the Human-Animal Research Interest Group and a member of the Climate Change Research Group.

Toadvine regularly teaches courses in the Philosophy Department and the Environmental Studies Program. An archive of past course syllabi is available here: http://pages.uoregon.edu/toadvine/teaching.html

(For a full list of publications, see Toadvine's CV above)